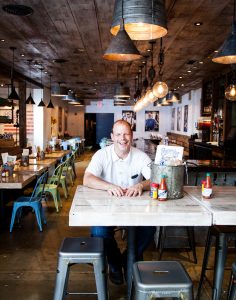 Tonight, Nashan was named Best Chef: Midwest at the foundation’s annual awards gala in Chicago. This was Nashan’s third nomination as a finalist (he has made the semi-finalist list five times previously).

“Who thinks this is going to happen to them,” Nashan told the RFT just shortly after the award was presented. “I’m just so humbled. Seriously, I never thought it was going to happen.”

When he took over Sidney Street Cafe in 2003, the restaurant already had a solid reputation amongst St. Louis diners as an upscale meat and potatoes spot. Under Nashan, it has transformed over the years into a bastion of thoughtful, classically anchored modern cuisine, earning it a place amongst the city’s most iconic restaurants.

In 2014, Nashan opened Peacemaker Lobster & Crab Co., which has also won raves from critics and diners alike. (The award solely honors his work at Sidney Street.)

The win is not just a win for Nashan, but for the city of St. Louis as well. Nashan’s award represents the second time in three years that a St. Louis chef has earned the honor. Gerard Craft was the city’s first winner when he brought home the award in 2015. Once chefs win a regional category — like Craft, and now Nashan — they are ineligible to compete in that category again.

“I’m just so happy my team was here with me and able to watch as it happened,” Nashan says. “Now I have to call my mom. She’s probably wondering what’s taking me so long.”